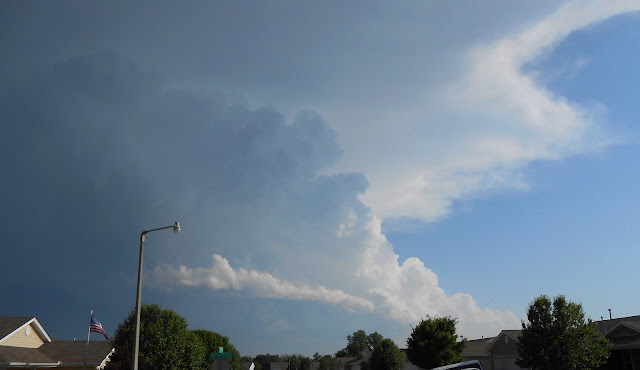 Six years ago, I started a blog (Prairie Homestead) - and in my second post, I wrote about about a spring storm and what it means to live in Oklahoma - in the middle 'tornado alley'.
http://prairiehomestead.blogspot.com/2007/03/surprises-ugly-bad.html

Spring storms are a fact of life here on the Southern Plains - but, yesterday's storm brought us to our knees -- in shock over the loss of lives and in prayer for strength to continue.

And, then we stood up and continued with the rescue and recovery.  Soon we will lay our loved ones to rest and begin the process of rebuilding - may our faith keep us strong today and in the weeks/months ahead.

http://newsok.com/another-storm-another-prayer-for-gods-mercy-on-oklahoma/article/3828035
And, because I'm not sure how long the above link with be available - I copied/pasted the text below(my apologies to The Daily Oklahoman).


Another storm, another prayer for God's mercy on Oklahoma

The Oklahoman Editorial | Published: May 21, 2013 Oklahoman
A row of backpacks on hooks in a roofless grade school corridor.  This is just one of many images that will stay with us because they represent the horror without actually being the horror. The fate of the students, the fate of their teachers. The fears of parents helpless to help when their children needed them the most.

May 20, 2013.
So accustomed are Oklahomans to severe weather warnings that Sunday's tornado outbreak took a while to get our attention. Then came Monday. Then came comparisons to May 3, 1999. Then came images of storm path charts showing where the two tornadoes crossed, a common point separated by 14 years and a thousand indelible memories.
Then came the image of the backpacks at a Moore school reduced to rubble in a flash.
It will be ages before anyone questions the need for frequent program interruptions and those annoying weather maps on the bottom of television screens. Our colleagues in broadcast journalism deserve high praise taking the threat seriously from the moment a funnel cloud began its descent near Moore.
Meteorologists had advised of the possibility a major storm was brewing, but they couldn't say for sure. The tornado bisque they described boiled over. We viewed in horror a grim repeat of that May 1999 “storm of the century,” a pristine cone turning nasty and black as it wrapped itself in dark rain and ground our bones to make its bread.
How awesome and furious was this fresh show of celestial fury, in a different century yet seemingly in the same place. That more lives weren't lost on that Monday and this one is a tribute to the preparedness that Oklahomans have built into their thinking.
Now come the sad stories, the heartrending deaths of young and old, the miracles and the survivals, as the black funnel wraps itself in grief. Now come the recovery, the selfless deeds, the sacrificial giving and the comforting words.
This is a time when patience is the supreme virtue and thoughtfulness second to none. Homes will be rebuilt and families brought back together, but it will take years to restore normalcy. Talk of closure and healing is premature.
The hurts are impaled on our consciousness. The wrath of weather on full display reminds us that there are forces that do not answer to man. We are at their mercy and all we can do is ask for mercy.
Most of us were spared in 1999, but the next time came for new victims. Next time we could be the ones to lose homes and loved ones, who have an unclaimed backpack on the hooks in a roofless corridor.
This is all more reason to stay prepared, to stay tuned to weather alerts but also to stay attuned to a Greater Power that rules our lives and calls forth nature. Through death and destruction, in chaos and calamity, but also in recovery and redemption, God is in control.
Have mercy — once again — on Oklahoma, O Lord! Let your peace prevail. May your grace shower the city and wrap it in light. Help us share the suffering and make our hands yours to rebuild shattered communities and lives.
Selah.
This editorial by Opinion Editor J.E. McReynolds is adapted from “The Storm — and a prayer” published May 5, 1999.

Email ThisBlogThis!Share to TwitterShare to FacebookShare to Pinterest
Labels: Oklahoma, On my mind