Because our summer was hot, hot, hot ---- there was a lot of reading going on at my house. 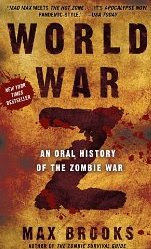 World War Z by Max Brooks
This is not something I would have even been tempted to put on my reading list -- but, a good friend talked about it at our weekly Stitcher meeting and intrigued.  The next day, after a search on Amazon.com, I found myself pressing the 'buy now' button.  Received the book on a Thursday and finished it late following night.

The entire book is done in a report format by different survivors of a plague.  Those who get the plague become zombie-like creatures and they in turn, bite and infect others, creating more zombies. It sounds as though the book would be filled with blood/guts and moaning/hungry monsters -- it's not.  Don't get me wrong - there are zombies, and they do moan and go after healthy humans - but, that's not the main story.  The real story is how a small portion of the world's population did survive and what we can learn from their stories.

And, I do have to put a disclaimer in here - another reasons I wanted to read this book --
it will soon be a movie - starring Brad Pitt.
Brad looking all angst-filled -- trying to save the world - nuff said.
I know, I'm shallow like that !